Part II of the Florida series of drawings. 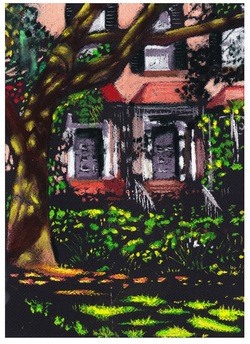 Monterey Square
While I was drawing this a man with a man came up to me and said in a German accent- ‘Is this the square where they made the movie?’
‘I don’t know.’ I said, ‘Which movie are you talking about?’
‘Forest Gump,’ he said.
And then, maybe out of embarrassment, he started laughing.
And then, because he was laughing, I started laughing too. 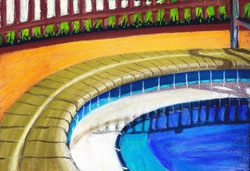 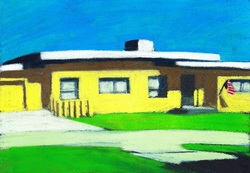 Yellow House With Flag
While I was drawing this a sandy-haired man came out of the house to the left of where I was sitting, got into the back of a pick up truck, stood up and shouted out-
‘It’s like totally frikkin annoying to be interrupted like in the middle of everything all the frikkin time.’
Then the man went inside and a small dark grey dog with a face like a an ugly little bat came out of the same house and stood on the grass staring at me.
I stared back at it for a while and then made some dog-friendly whistle noises.
But the animal didn’t respond; didn’t bark, didn’t growl, just stood there staring at me until eventually, bored by it’s inaction, I ignored it and went back to my drawing. 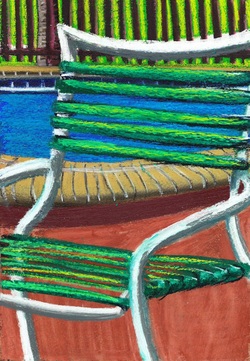 Chair II
While I was drawing this I could hear a little boy behind me in the pool asking his mother-
‘Mommy, what’s she spraying on her paper?’
Then he asked her another question about what I was doing.
And then another.
And then another.
Finally I turned around to him and said- “Why don’t you ask me? I’m from England and we speak English there,”
And then, worrying I might have sounded slightly rude, I forced myself to laugh.
But I needn’t have worried, because the mother laughed too and said to the little boy, ‘Yeh, go on, she speaks English, why don’t YOU ask her what she’s doing?!” 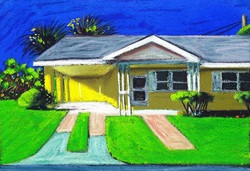 Driveway
While I was drawing this a group of people made up of 2 elderly men, an elderly woman and a young teenage girl went past.
It was only 9am but they were already wearing beach clothing; water shoes, bathing suits, hats, sunglasses.
‘Ya mind if I take a look at what you’re drawing there?’ said one of the elderly men crossing the street toward me.
‘Of course not,’ I said.
‘Well, my, look at that,’ he said, standing behind me and looking down at my picture,’ that’s really coming along,’
Then the other man came over and looked at my drawing.
And then the girl came over.
Ant then the woman came over and they were all standing behind me saying things like ooh, ahh, woah.
Then the elderly man who’d crossed the street first said-‘What inspires you to draw a place like that?’
‘Well, the light has to be right and the house has to be a pretty colour,’ I told him, ‘and that’s about it,’
‘Well,’ it’s beautiful,’ he said and the others said some similar things.
Then, because the sun was out, and because the light was right, and because I was sitting in a street in Florida drawing a picture of a house, as the 2 elderly men and the woman and the girl all turned to walk away I called out, ‘You all have a nice day now’ and really meant it.
619 708 4878      About        Contact ​     Instagram     A Hundred Houses      Blog- I've Gone To Look For America.    My Etsy Store